If you’re a Google Ads PPC marketer, you are well aware that it’s a best practice to run every relevant and available Ad Extension alongside your search ads. In this blog post, we’ll be explaining Ad Extensions, how they work and how to interpret their data.

What are Ad Extensions?

An Ad Extension helps to expand your search ad, providing the searcher additional information about your business. Ad Extensions often increase an ad’s CTR significantly, since they make the overall ad appear larger and take up more room on the Search Engine Results Pages (SERPs) when shown. One of the reasons this helps improve CTR is because it pushes down competitor’s ads and also gives the user more information on why they should choose your business.

What Types of Ad Extensions Exist?

There are many types of ad extensions available in Google Ads, some clickable and some not, and Google is often testing new extension types. A current list of Ad Extensions are as follows:

While most of the ad extensions can be manually set up – which is recommended by our team here at Eboost Consulting – Google does offer some extension types that don’t require any set up, which are referred to as Automated Extensions. If these are enabled, they can show on their own, or alongside your manually-created extensions. We prefer to develop manual extensions for all possible types in order to control messaging and relevancy, and use Automated Extensions only for the types that don’t allow for manual setup.

How Often Do They Show?

No matter how many Ad Extensions you have added – at the account, campaign or adgroup level – Google Ads does not guarantee that they will show all of the time, and we’ve found that our most popular extensions typically show only 80% of the time. Ad Extensions will show with your ad when Google determines that the particular extension, or a combination of extensions, will help improve ad performance AND when your ad’s position and ad rank is high enough for the extensions to show.

How Much Do They Cost?

There is no additional cost to run Ad Extensions alongside your search ads. You are still only charged on an ad click; wherever that ad click may be. So, if the searcher clicks on an ad’s headline, you are charged. If the user clicks on an Ad Extension – like a sitelink, app extension or even a call extension – you are charged for that click. You are still paying entirely on a CPC basis, with no added costs. The only exception to this rule appears to be on Seller Ratings, which are an automated Ad Extension type. Clicks on these extension types do not incur charges.

How to Find Ad Extension Data

We often find that many people – whether it be clients or even PPC Managers themselves – are unclear on how to read the Google Ads Extension data, because it is unlike the rest of the reporting within Google Ads. The tricky part is that the stats Google shows are for your whole ad WHEN the particular Ad Extension shows. So, if you see data in the “Clicks” column for a particular extension, it is normal to assume that is the number of clicks on a particular extension, but it is NOT. It is the number of clicks the whole ad received WHEN the particular extension is shown. The reason Google sets up the reporting this way, is because people don’t actually click on extensions as much as you’d think (and, some aren’t clickable at all) – so instead, Google is showing you how the ad performed as a whole when the Ad Extension was shown. Here’s how Google describes the data, which is important for truly understanding cost and performance:

So, how do you see data for an ACTUAL ad extension?

Let’s look at a clickable ad extension: a sitelink. 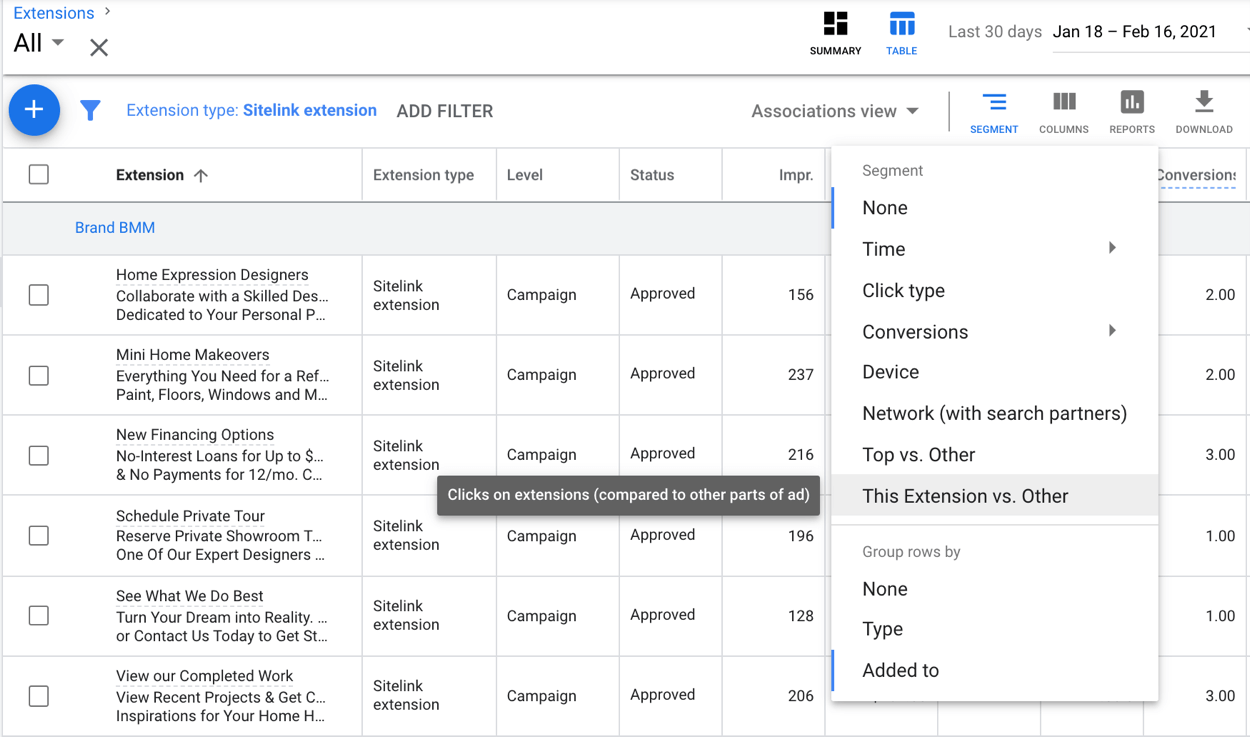 Another trick we’ve learned is that you can take the impressions from the Ad Extension table, whether segmented or not, and compare that number to the total impressions you’d find in that account, campaign or adgroup (depending on what level you’ve added the extension). By comparing the amount of times the ad was shown in total to the amount of times the Ad Extension was shown with the ad, you can learn the rate at which your particular Ad Extension is showing and showcase that as a percentage.

You may find that sitelinks show 80% of the time, while structured snippets show 60% of the time. As a PPC marketer, you can determine which ad extensions have the better data and performance. If it’s the structured snippets – what are some strategies you could employ to get them to show more often? If a particular sitelink is weaker than the rest, how might you get it to show less and maximize the impressions shown for the others?

THAT is how you develop a strong Ad Extension strategy!

Are you getting the most out of your Ad Extensions in Google Ads? If you’re unsure, contact our team today to take a look!